"Five hours off the reservation and I show 30% drain. My compliments to Engineering. Except for a slight malfunction on the nulling of the roll axis, this jetpack is one prime piece of thrust."
―Kowalski on the MMU prototype

The Manned Maneuvering Unit (MMU for short) is an astronaut propulsion unit best described as a thruster pack that was used by NASA on three Space Shuttle missions for unmanned spacewalks in 1984.

An advanced, experimental prototype version of the MMU was seen in Gravity with good fuel economy.

The MMU allowed the astronauts to perform untethered EVA spacewalks at a distance from the shuttle. The MMU was used in practice to retrieve a pair of faulty communications satellites, Westar VI and Palapa B2. Following the third mission the unit was retired from use. A smaller successor, the Simplified Aid for EVA Rescue (SAFER), was first flown in 1994, and is intended for emergency use only. The unit featured redundancy to protect against failure of individual systems. It was designed to fit over the life-support system backpack of the Space Shuttle Extravehicular Mobility Unit (EMU). When carried into space, the MMU was stowed in a support station attached to the wall of the payload bay near the airlock hatch. Two MMUs were carried on a mission, with the second unit mounted across from the first on the opposite payload bay wall. The MMU controller arms were folded for storage. When an astronaut backed into the unit and snapped the life-support system into place, the arms were unfolded. To adapt to astronauts with different arm lengths, controller arms could be adjusted over a range of approximately 13 centimetres. The MMU was small enough to be maneuvered with ease around and within complex structures. With a full propellant load, its mass was 148 kilograms (326 pounds). Gaseous nitrogen was used as the propellant for the MMU. Two aluminium tanks with Kevlar wrappings contained 5.9 kilograms of nitrogen each, enough propellant for a six-hour EVA depending on the amount of maneuvering done. Typical MMU delta-v (velocity change) capability was about 80 feet per second (24.4 m/s). There were 24 nozzle thrusters placed at different locations on the MMU. To operate the propulsion system, the astronaut used his fingertips to manipulate hand controllers at the ends of the MMU's two arms. The right controller produced rotational acceleration for roll, pitch, and yaw. The left controller produced translational acceleration for moving forward-back, up-down, and left-right. Coordination of the two controllers produced intricate movements in the unit. Once a desired orientation was achieved, the astronaut could engage an automatic attitude-hold function that maintained the inertial attitude of the unit in flight. This freed both hands for work.

A Spanish drawing depicting features of an MMU 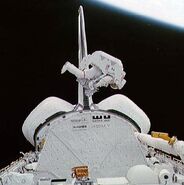